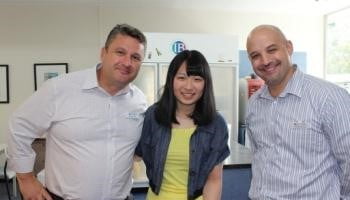 Reiko Kato was a Study Abroad student from Morioka Chuo who studied at Blackwood High School for one year in 2012. Reiko has just graduated from high school in Japan and recently returned to Adelaide for a holiday before she starts university. Reiko plans to study Languages and International Relations. This is what she wrote after her visit.

I was so happy to see the school and the teachers again. Visiting BHS reminded me of the time I spent in 2012. I have so many memories of Blackwood High School, it’s hard to choose the best one.

I think I enjoyed Physical Education class the most. At the beginning of the Study Abroad program, I hardly could speak English and my lack of ability with English discouraged me to speak to local students. But I got familiar with several students in the class and they helped me a lot. When I didn’t understand what the teacher tells me to do, they explained it with easy English. I kept taking the class for a year and I tried to talk as many people as I could, so that I got used to PE and it became one of my favourite classes. During practical lessons, I had to talk to other students to communicate and that helped me to improve my English. In my opinion, I think it is required for exchange students to do physical activities with local students. When I was in BHS, it was common for us to be in a group of international students during recess and lunch times. I know it is much more comfortable to be with students from the same country, but it makes it hard for us to start communicating with local students. I was one of them though; sometimes I wondered what the point of studying at Blackwood High School. So I thought about this and I started talking to students in class and care groups. It took a while to get used to doing that though.

During Term 4, I went on an excursion for Legal Studies and it was fun. I was so nervous before the excursion, but I tried to talk to students aggressively (confidently). Eventually, I made friends to talk with. It is one of the best memories as well. I was the only international student in that class at that time, so there was no one who can speak Japanese except me. I think that was a really good opportunity to practise English and to make friends.

Studying abroad is not only to improve English, but also to make friends and to have a good time at school. That is what I thought through the year.

We wish Reiko well in her future studies.