Trials will be held at Blackwood High School, date and time to be confirmed 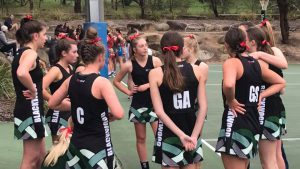 The structure of the program allows students to pursue their interest in netball as well as maintain a focus on academic study. It is a multi-faceted educational program focusing on Netball and the essential elements building towards successful performance in sport. The aims and objectives of the International Baccalaureate Middle Years Programme (IBMYP) are incorporated as the students extend their skills, performance standards and knowledge while valuing an active, healthy lifestyle.

Students will perform skills with efficiency, accuracy and consistency. The Netball Australia National Skill Development Pathways form the basis for specific content in each year level from basic skill to advanced/tactical play.

A variety of forms of feedback will be used including skills check lists and video analysis of techniques.

Year 8: Students develop awareness of the concept of fitness, the specific demands of Netball and how to prepare themselves for their performance

The subject is predominantly practical however specific theory work is also undertaken.

Topics covered will include:

The Netball program also competes in a range of competitions/ carnivals